Engage to Serve the South Bay
Ensure Redondo Is Well Represented
You Spoke. I'm Listening.
Thank You.
Together, We Can Do Great Things! 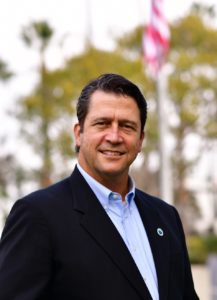 Thank you for visiting my website. I am deeply honored to represent North Redondo Beach (District 4) on City Council.

It’s campaign season, and I Respectfully Ask for Your Vote to Re-Elect me for a Second & Final Term as your City Councilmember.

Thank you for your confidence, support and your vote. Please mail your ballot before March 2nd, 2021.

As a 22-year resident on Vanderbilt Lane, I love Redondo and it has been good to me, my family, and my businesses.  Four years ago, I stepped up to serve District 4 and give back to our community.  Check out my Video Story: Serving On City Council for a brief look at getting elected and serving in office. It’s been quite an experience.

Redondo Beach is currently addressing multiple, once-in-lifetime opportunities and challenges: $900M Galleria Upgrades, Waterfront Project, AES Power plant and now the COVID-19 Pandemic and its significant budget impacts.  I rely on 15+ years of City engagement and volunteerism coupled with my experience as a Senior Executive and Management Consultant to make the best decisions on your behalf. 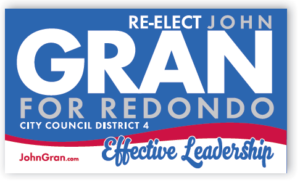 We do best when I hear from you.  Please speak up!

Together, we have made significant progress, but there is so much more to do.  Along with stop signs, potholes, and other routine items, I need your input and support to move these North Redondo Projects forward:

Thank you for electing me as your District 4 City Council member. Your priorities are my priorities. I will listen to your ideas, address your concerns and always be present, prepared, and ready to fight for you.

Together, we are doing great things! 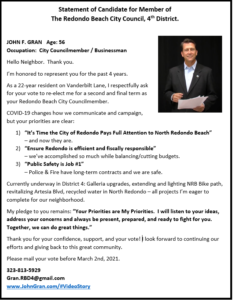 A South Bay native, John graduated from South Torrance High School and earned his bachelor’s degree in Information and Computer Science at UC Irvine.  In 1999, he bought a home in Redondo Beach and met and married his wife Cynthia soon after.

Currently, John is a healthcare management consultant and an entrepreneur and is currently working with National and Regional Hospital systems to identify and implement value-based care practices, and ultimately lower the total cost of care.

John has founded and consulted for several start-ups, raised $53 million in venture capital, built and operated national departments within Fortune 100 healthcare companies and helped put several struggling companies and departments/products on the path to success.

Although John enjoys reading, playing golf and walking with friends on the strand, his true passion is helping small businesses grow. He is always excited to help friends and colleagues develop novel ideas, start new businesses and expand existing operations. 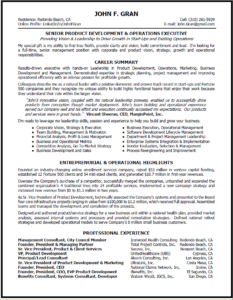 Giving Back to Our Community 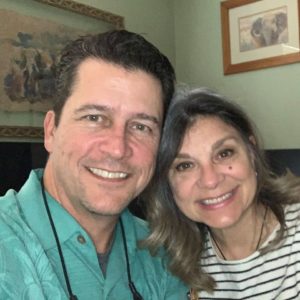 In 2018, John and Cynthia became founding members of Redondo Beach Kiwanis, an International Service Club, who’s sole purpose is to help children in our local community and around the world.

Working closely with the club’s 50 members, they have found a fun and fulfilling way to give back to our local community.  Service.

In October 2020, John became the Lt. Governor of Kiwanis Division 19, and lead 15 local clubs to support their projects, increase membership and represent Division 19 at the District and International levels. 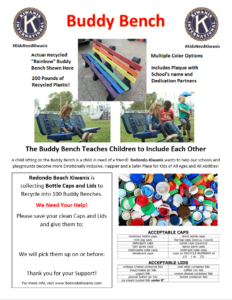 The benches are then dedicated and installed at the schools to help promote Friendship, Kindness and Recycling!  The project is very popular and the Club’s goal is to install 500 Buddy Benches in 5 years.

There’s lots to do and the Kids love the Buddy Benches. They really work!

Kiwanis – Making friends while giving back!  It’s fun and rewarding! 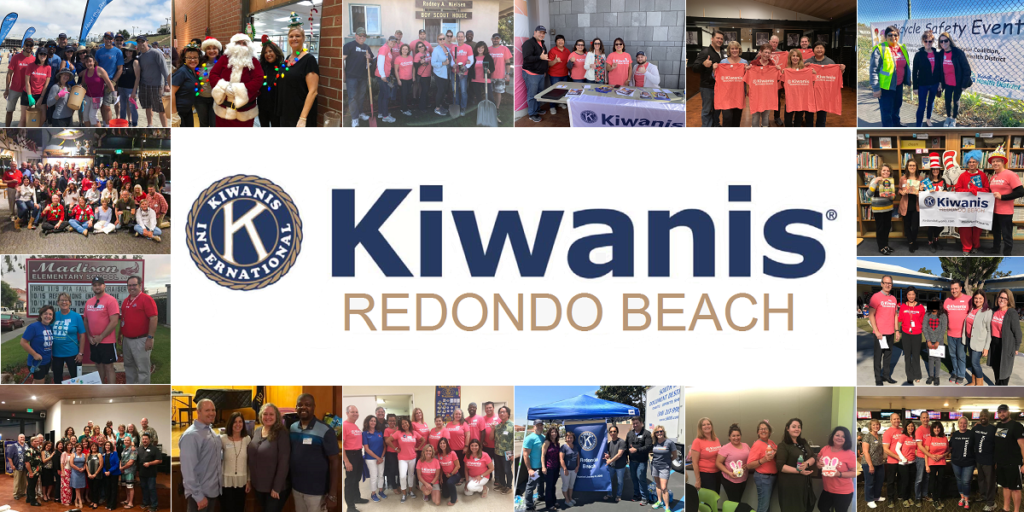 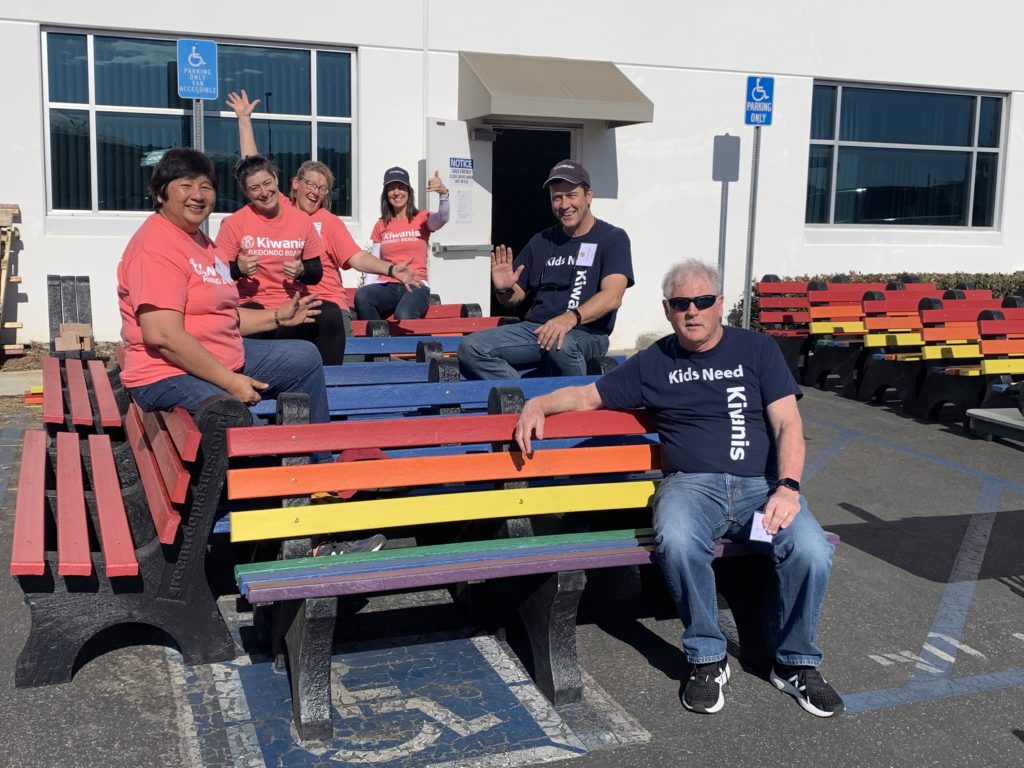 A Leader In the Community

A dedicated community advocate and volunteer, John is driven by his desire to give back to the City that has given so much to him and his family.

That’s why he’s been hard at work for us for years, safeguarding our neighborhoods, advancing the well-being of our residents and improving the health of our business community.

Serving the City and the Business Community

Since 2006, when John became a Neighborhood Block Captain, he has continued to participate in Redondo’s civil programs, lead local business groups and step up in roles and responsibilities within the City’s appointed and elected offices.

Click on the Blue Tabs below to see John’s past 15 years of increased participation, growth and experience in serving Redondo Beach residents and businesses. 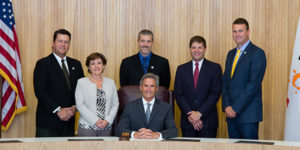 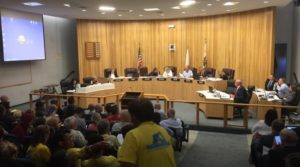 Three ways to watch and participate in City Council Meetings:

John holds monthly community meetings on the 2nd Saturday of each month, 9AM -11am, at the Perry Park Senior Center.  40+ residents attend.  Check out John's Event calendar for dates and times. 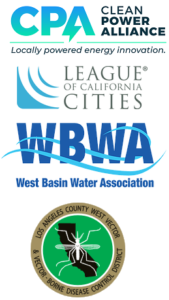 He served as Vice Chairman, and facilitated commission meetings when required. 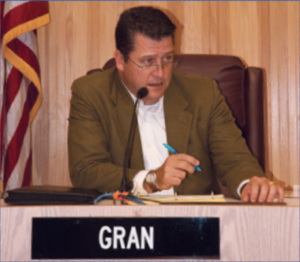 MEMBERSHIP
The Commission shall consists of 7 members appointed by the Mayor, subject to approval by the City Council.

The Commission shall be an advisory commission only. It shall:

The Chamber of Commerce helps local businesses through marketing, networking and providing training programs and supports the local business economy. 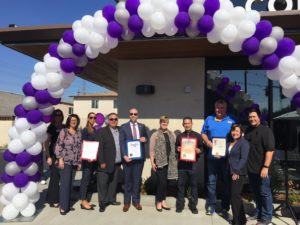 John's local businesses have prospered because of his association with the Redondo Beach Chamber of Commerce.

John represented North Redondo Beach businesses on the Board since 2011, and was named to the Finance Chair / Treasurer  and Executive Board in 2015. 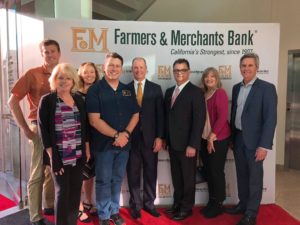 As an Executive Board member:

John continues to attend and volunteer for various Chamber Events, including the Superbowl 10k, Network Cafés and Annual Mixers. 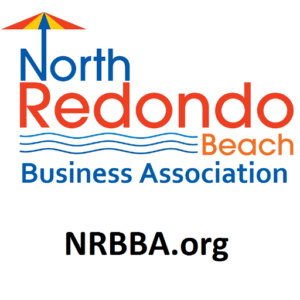 The NRBBA is dedicated to helping local businesses grow.

In 2014, John was elected President in 2014.  He served as Treasurer since joining in 2011.  As President, he presided over Board Meetings and the budgeting process, and ran the monthly General Meetings with 40+ attendees.

The NRBBA continues to pursue the following initiatives:

The NRBBA meets the 2nd Thursday of the month, 8:00am at the RB Public Library, North Branch.

For more information, please visit the NRBBA website at www.NRBBA.org

Leadership Redondo is a program designed to prepare a select group of individuals who live and /or work in Redondo Beach to become future community leaders. It's an 18-month commitment.

Year one is devoted to intensive study about Redondo Beach’s resources, citywide vital issues and residents.

For the final 6-months, the group completes a class project, to give back to the City of Redondo Beach.

The project was delivered on time and on budget. 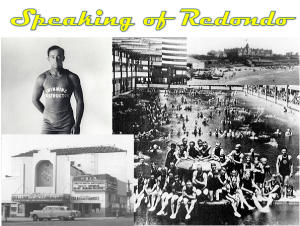 Inspired by the Leadership Redondo Class of 2004, John took their class project: “Speaking of Redondo” videos - personal testimonials about Redondo Beach - and created a website to present these important videos online.

Check out  http://SpeakingOfRedondo.Wordpress.com to view these videos. 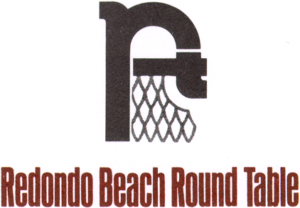 The Redondo Beach Round Table brings community leaders together to discuss local issues.

John was asked to join the RB Round Table in 2014 and regularly attends the quarterly meetings. 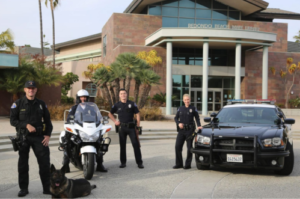 "You can't really understand another person's experience until you've walked a mile in their shoes."

The Redondo Beach Citizen Police Academy provides community members with a working knowledge of the police department, along with the roles and responsibilities of its police officers. 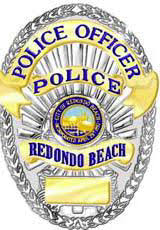 The goals of the program are accomplished through lectures, hands-on training, demonstrations and a ride-along with a police officer.

Participants meet for three hours, one night per week, for 13 weeks. The information covered includes: 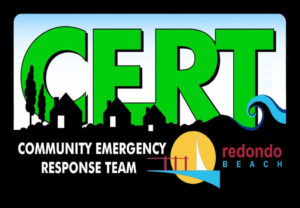 They accomplish this by supporting and attending ongoing emergency preparedness training. Members are encouraged to achieve a high level of preparedness and provide volunteer support to the Redondo Beach Fire Department in the event of a major emergency.

The Redondo Beach Fire Department C.E.R.T. Academy began in April 1996, with overwhelming success. To date, over 1,000 individuals have received training.

A team of Redondo Beach firefighter instructors provide the training.

Neighborhood Watch is a crime prevention program which enlists the ACTIVE participation of residents in cooperation with law enforcement to reduce crime in their communities.  “See Something – Say Something”  (310) 379-5411

Neighbors getting to know each other and working together in a program of mutual assistance,
Residents trained to RECOGNIZE and REPORT suspicious activity in their neighborhoods; and
Implementation of crime prevention techniques, such as reporting of suspicious activity to RBPD (310) 379-5411 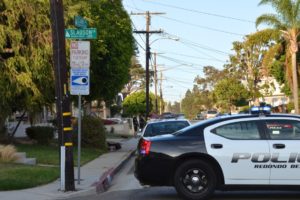 Neighborhood Watch is an effective way to keep our City safe!

If you are interested becoming a Block Captain and want more information about the program,
Contact the Community Based Policing Unit Officer Mike Diehr at (310) 379-2477, 1-2493, or by e-mail at mike.diehr@redondo.org

John has been an active Neighborhood Watch Block Captain since 2009.   In 2015, John helped implement a new “business” neighborhood watch program with the NRBBA. 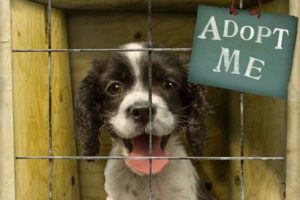 John is also involved with other community organizations in and around Redondo Beach.

These organizations and groups include:

South Bay Animal Shelter Task Force
Cynthia and John are animal lovers and are working with group that is investigating funding and operating an animal shelter that will serve the South Bay. 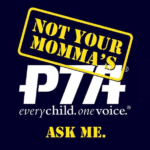 Community Member of the Redondo Beach Parent & Teachers Association (PTA)
John is a community member of Redondo Beach PTA, even though he does not have kids.

Member of the TedxRedondoBeach planning committee
In the spirit of ideas worth spreading, TED has created a program called TEDx. TEDx is a program of local, self-organized events that bring people together to share a TED-like experience. John has helped with several TedxRedondoBeach events and enjoys attending the talks. 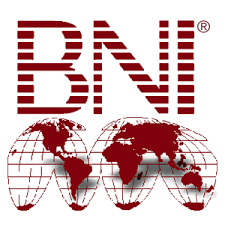 A number of my friends and neighbors have asked me why I decided to run for City Council and serve my fellow residents.

Short Answer:
To Give Back to My Community.

I’m running for Re-Election to Serve a Second & Final Term as your City Councilmember for District 4.

Ultimately, I find serving on the Redondo Beach City Council quite rewarding and I absolutely love to “GSD” for my neighbors and community.

Thank you for your confidence, support and your vote.

Please make sure to send in your ballot before March 2nd, 2021! 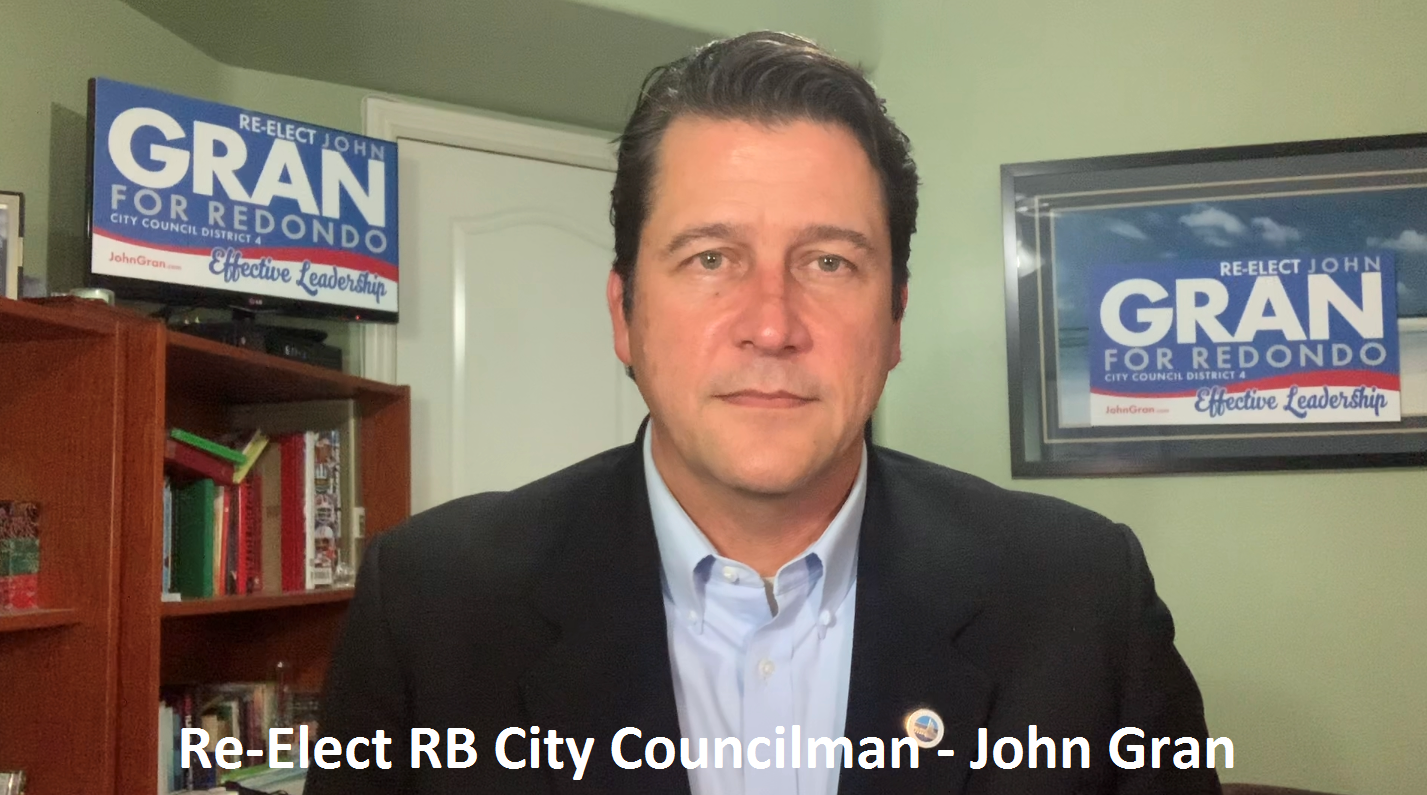