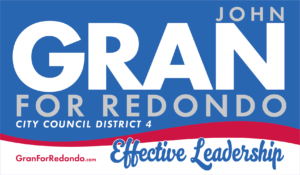 Gran is inviting friends, family and residents to join him at his campaign’s official kick-off celebration on Thursday, October 13th, from 6 – 9pm at the King Harbor Brewing Company located at 2907 182nd Street in Redondo Beach. The event is open to the public.

Gran states, “I look forward to introducing my positive, fact-based message to residents and listening to their thoughts and concerns first hand.” Gran continues, “And I’m excited to better understand my neighbor’s priorities and prepare to serve them on City Council. “

Gran’s vision for the City includes a focus on public safety and emergency preparedness, ensuring the City and RBUSD work collaboratively to challenge and inspire students, revitalizing the Artesia corridor and demanding the South Bay Galleria espouse a “unique and balanced” plan to ensure success. Says Gran, “Redondo Beach is an amazing city, and District 4’s voice has been muted and/or absent for the past 3 years. Our residents and local businesses deserve better!”

Known for his results-oriented leadership and understanding of City government, Gran promises to bring “Effective Leadership” to District 4. His list of qualifications includes City Budget and Finance Commissioner, President of the North Redondo Beach Business Association (NRBBA), Treasurer of the Redondo Beach Chamber of Commerce and being a long-time active Neighborhood Watch block captain.

“For the past 9 years I’ve taken on multiple volunteer roles with increasing responsibility, in both local government and our business community.  I’ve earned a reputation for getting results and now I’m prepared to step up and be the Effective Leader that District 4 needs on City Council.”