May is Bicycle Safety Month

These benefits are nothing new to cyclists and community leaders. Many cities have created bike-friendly routes now complete with bike paths, special bicycle parking areas and special amenities. National Bike Safety Month in May is just one way we celebrate our love to ride.

However, motorists and bicyclists must take extra precautions when they travel together. Riders often share the road with vehicles, which creates a host of hazards, and injuries can happen even on a designated path. In 2016, California passed legislation requiring motorists to proceed past riders with at least a 3 foot of clearance.

According to National Safety Council Injury Facts 2017, 488,123 people were treated in emergency rooms in 2015 after being injured riding a bicycle. The only sport resulting in more injuries overall was basketball, at 493,011. Football was third, at 399,873.

According to Injury Facts, about 1,100 deaths resulted from cyclists colliding with motor vehicles in 2015. With about 80 million bike riders sharing the road with millions of motorized vehicles, the importance of safety precautions in traffic cannot be overstated.

Cyclists who wear a helmet reduce their risk of head injury by an estimated 60%, and brain injury by 58%. That statistic makes sense when you consider the first body part to fly forward in a collision is usually the head, and with nothing but skin and bone to protect the brain, the results can be fatal.

Get out your bicycles and Be Safe! 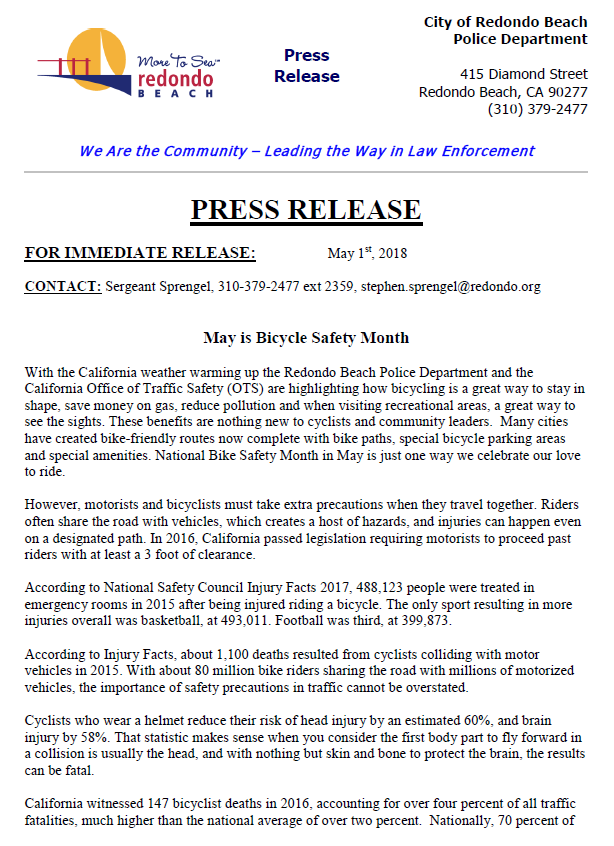